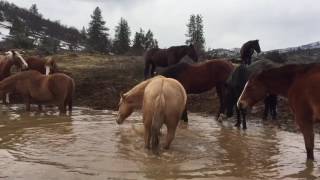 "A long red road travels down his back from his mane to the top of his tail and every time I run my hand along it, I see the old ones walking and weaving through the monuments where the summer sun shines hot and long, and where the bones of the others before him have fed the earth. His orange coat is the color of the sunrise telling you all is in balance, friendly, warm for the day. And it’s the orange color of sunset affirming that the day was sweet and it coats your skin and everything around you, in a glow that bathes your doubts away. His eyes amber-brown, large and moist circled by black rings, tell of his ancient lives in deserts near and far. His name is Helaku and it means ‘full of sunlight’. He was born with his name. I was lucky enough to know it. When I found him he was cast out, thin from lack of food and skinny from lack of love. And when I came with the trailer to get him out he jumped in and never looked back. He stood over me one time when I took a hard fall, guarding me from the others… gently nudging me until I gained my composure and stood up. He hugs me back when I hug him and was the only one in my herd of four that would play with Pableu a young colt we brought home. If he were human he’d listen to Coltrane and smoke hash. He’s deep, sweet, handsome, tall and mellow and every bit as wild as the cinnamon stripes hiding on his legs. I’ve watched him stand alone for hours lost in deep meditation. I call him ‘my big red boy’ and know he’s not mine…never was, never will be. He’s so confidant and cool no one person, mare, colt or landscape can claim him and they should know they can’t. He walks along with the confidence of one who knows way too much for this life, this earth, and is just waiting until he can travel to the next place far away, where his long and oh so light stride, matches the vibe of his days in a way that it does not here. He’s a spirit horse and if you meet him, he will imprint in your mind and heart a memory that you will never loose and long to recall with brilliant detail."

Helaku came to us from Roxanne who, while working as a BLM compliance inspector, found him in a horrific situation. He was imprisoned in a small roundpen snubbed to a post in the center. The halter that held him tight was embedded into his nose with many broken lead ropes and snappers hanging from the bottom ring. Roxanne rescued him, took him into her own home and started him down this path back to freedom.

We are so honored to have him as part of our wild herd, he is sweet, strong, thoughtful and watches over everyone.